In one of our recent posts about the National Parks, we wrote about how different the parks were in what they offered the visitor. There is however, one thing all the parks along the length of the Rocky Mountains have in common and that’s bears! One could be excused for thinking that the Rocky Mountain region in general is just a wee bit obsessed with bears. In a similar way to how northern Australia uses crocodiles to promote areas, to educate people and scare visitors to croc areas, so to with the Rockies and their bears – but more so! The recreation areas – National and State Parks and National Forests, between them have vast numbers of camping opportunities and obviously a responsibility to keep visitors as safe as possible, hence there is an overwhelming amount of information in all camping and recreation areas about what bears look like and how they behave, what they eat and why, how big and dangerous they are, how to avoid them and most importantly, what to do if you are confronted by one. Many millions of acres of trees have been sacrificed to produce information posters, flyers, booklets, stickers and notices of all sizes and shapes with specific advice on what to do if a bear is looking at you as if you are its next meal. 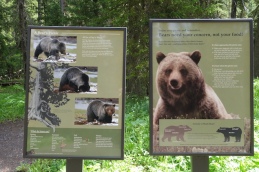 Now, here’s where it gets tricky to novices like us. The advice on what to do varies so much and is so inconsistent that it really is a bit scary. We have included some photos of excerpts from posters and info booklets for you to peruse, but below we’ve put together a few dot points we have read or been told to do if confronted by a bear – you will see why we are confused!

#1 Don’t run (this is the only consistent piece of advice, but probably the one most people DON’T follow!)

#3 Back away slowly, talking calmly to the bear so it knows you’re a human (yeah right – calmly!)

#4 Roll into a ball and protect your stomach and neck (we thought about practicing this one, just in case!)

#5 Fight back, punching and kicking (Oh yeh, this’d work – have you seen the size of a bear’s claws?)

#6 Lie down on the ground and play dead (This was advice from a Ranger at a talk we went to in Yellowstone!) He added that you might lose some flesh but chances are if you stayed still the bear wouldn’t consider you a threat and would lose interest!)

#7 And our favourite – ‘If the bear is threatening, persistent or aggressive … call the Conservation Officer Service at 1-877-952-RAPP’ (make sure your phone is charged!)

We should add that if you follow all the rules about being ‘Bear Aware’ which are pretty much common sense things like not leaving food around, never approaching bears and making some noise as you hike through the bush so you won’t startle them, then you wont have to worry about facing up to an aggressive one.

Just as an aside, we were speaking to a professional guide from the Yukon recently, who said that in the last 100 years, 84 people had been killed by grizzly bears in Alaska – doesn’t sound good, however, over that same period of time, 340 people had died of bee stings in Alaska. Mmmm, food for thought!

Of course, bears aren’t all bad – in fact the ‘good bear’ messages certainly outweighs the bad in this part of the land. From Salt Lake City, north, every community, village and small city makes the most of the fact that there may be a bear somewhere in the vicinity. Bears adorn the main streets – carved from wood, cast in cement, ceramic, fiberglass and metal, sitting on benches, leaning on poles, hanging from balconies, lying on rooves and looking into shop windows. There are so many stuffed grisly bears in museums and shops in these towns that it is surprising that there are any left in the wild. You can find stuffed bears serving drinks, bears welcoming you into stores, decorating camping and outdoor shops and then there’s the food – don’t pass up the opportunity to try huckleberry bear claw pie in Montana if you get the chance! We could go on, but you get the idea – check out the photos! 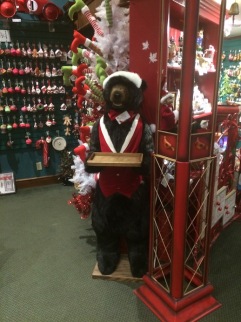 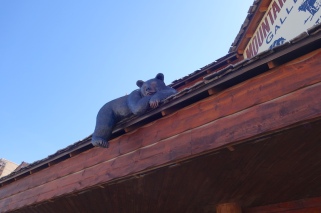 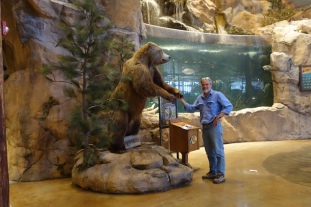 You’ll be pleased to know that we haven’t been caught up in this bear obsession at all – oh no, not in the least! It’s just a coincidence that we happen to be keeping track of the number of bears we have seen since Salt Lake City – 14 so far and counting!