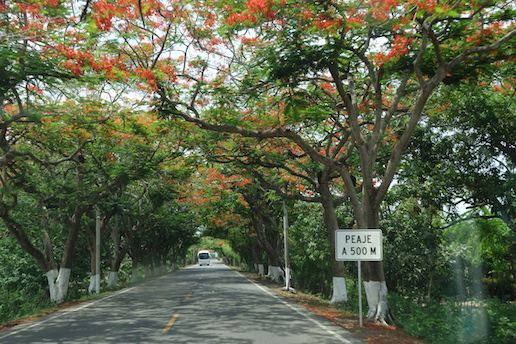 From Guatape we headed north through some incredibly interesting mountain country. By Colombia standards it was a good quick run up to lunch although the number of big trucks on the road laden with shipping containers was increasing, which was ominous! We were heading for the town of Caucasia and it looked like we would be there by mid afternoon at the rate we were travelling.

Shortly after lunch we found ourselves in the clouds, literally. Having been at significant altitude several times over the past few months and driven through some fog or cloud at times, we were amazed at how thick this cloud / fog was.

With semi-trailers coming towards you around blind bends, a cliff on one side of the road leaving very little room to move and visibility at one stage down to less than 5 meters, this was one of the most difficult stretches of road we have driven. The ever-present danger of someone running into you from behind, the greatest worry! Even on stretches like this at times there were people standing on the side and in the middle of the road, hands out, asking for money. The thick fog and reduced speeds of vehicles is an opportunity they make the most of, but scary for drivers, as a bodies suddenly materialise out of the fog right next to your window. 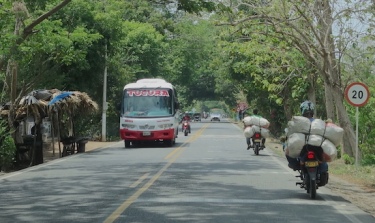 Very pleasant driving out of the mountains.

You share the road with a variety of ‘vehicles’

The road finally did start to descend out of the clouds after about 30 minutes, only to be replaced with bumpy, earthquake damaged roads and crazy drivers making up lost time. Rolling into the town of Caucasia, we realized big time the difference that altitude makes to temperature. After 6 months of cold, cool and mostly moderate weather, we were hit with hot and humid (think Darwin in the Wet), it was a bit of a shock!

Another day on the road took us to the coast and we stopped for a couple of days in a great little hostel just back from the beach, South of Tolu. We were well and truly in the tropics and even more obviously in the Caribbean! The music was loud and everywhere, the population looked and sounded different and bananas, mangoes, pineapples and coconuts adorned every roadside stall. The young fella who ran the hostel was great, plonking a bucket of mangoes next to the car not long after we arrived and making us cups of fresh brewed coffee at every opportunity. Our little fan got a big workout at night and the mozzies and sandflies were very friendly! Yep, we were in the tropics! During our ‘day off’ we had plenty to do as our time in South America was coming to an end and there was much to organize. Shipping arrangements, preparing the car for transport, accommodation in Cartagena, flights to Mexico, car insurance in Mexico and the US, the list goes on – there is always administration of some kind to do even travelling like we are!