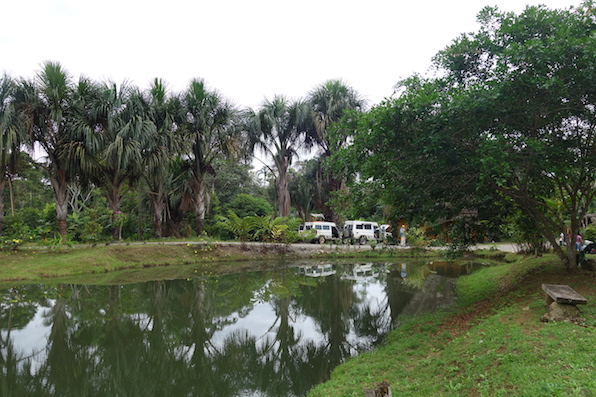 With the choice of more ruins and churches or the green, green jungles of the Amazon, we chose the latter and headed inland to Misahualli on the Rio Napo. The roads were windy, steep and slow going but the dense jungle plants and flowers, waterfalls cascading onto the road and regular rock falls kept things exciting. 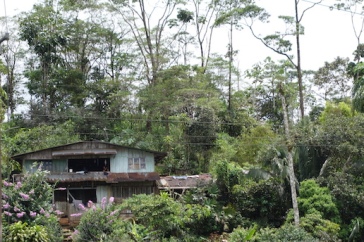 Tropical fruits (lots of bananas!) make up much of the produce being sold from the side of the road, but drive on a Saturday and village roadside vendors have chickens and pigs roasting on rotisseries which makes the mouth water.

When the opportunity to visit an artisan chocolate cafe arose we just had to stop. We were taken on a quick tour of the process of chocolate making before sampling some of the products. We even took some of them away with us!

We stayed in the grounds of a family run hotel surrounded by tropical plants and ponds full of fish that were served up in the restaurant.

We took a boat tour down the Rio Napo to an animal rescue centre to see some of the local native animals.

Run by volunteers, the centre was serious about teaching the animals not to trust humans so they could be more easily released into the wild. Hence, the animals were conspicuous by their absence and the only good photo we got was of a spider monkey that was hanging around outside one of the enclosures!

But seriously, we did see many animals and birds being rehabilitated, including a small puma, tapir, a variety of monkeys, a big anaconda and some beautiful macaws.

This whole area was beautiful and we really enjoyed traveling and staying in the region. The Quechua people we stayed with and met were lovely and their environment is peaceful and happy. We wished we could have spent longer here!