After 4 weeks in Peru we crossed into Ecuador at the main border crossing on the Pan American highway. Heading towards the border , we saw groups of people walking along the side of the road carrying small bags and sometimes bedrolls or suitcases. We presumed these people were refugees from Venezuela and this was confirmed by the presence of Red Cross and UN tents and staff at the border crossing.

Formalities completed after about 90 minutes, we were on the road again.

Immediate differences when crossing the border into Ecuador were the dense tropical vegetation, the distinct lack of roadside rubbish and the low price of diesel!

Diesel costs $1.03US per US gallon. A quick calculation put a smile on our faces when we realized this is around 30 cents Australian per litre. Consequently we were waved away from the first few petrol stations that we tried to fill up at. Foreign plated vehicles are not sold diesel near the border – presumably because it is subsidised for local use only. After about 50km, we successfully found a service station happy to sell us fuel.

Vegetation is thick, green and lush and gardens pretty. For the first time in South America we noticed garden nurseries too. Approaching Cuenca in the mountains, we noticed a distinct change in the style and quality of housing and the size of house blocks. We had clearly arrived in a more affluent area than anywhere we’d been in the last few weeks in Peru and Bolivia. We later learned that Cuenca has over 50,000 retired US citizens living there!

We spent our first two nights in Ecuador at Cuenca. It’s a colonial town with a plethora of churches and beautiful colonial buildings.

This was significant because we spent Good Friday in the centre of this beautiful town, watching the locals celebrating. 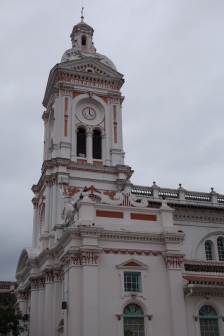 Outside the churches and along footpaths, were food stalls selling all sorts of edibles, many of which we don’t have names for.