As the capital of the Inca Empire for over 200 years, Cusco has an amazing history. However, the Spanish put a stop to that in 1533. After conquering the Incas, the Spanish moved into Cusco and built some beautiful buildings on the foundations of the Inca temples.

Today, it’s a treat to wander around the city. You can easily spot and admire the really old and the new-er buildings and the many neat, green squares and ‘parks’ give the place a good feel. 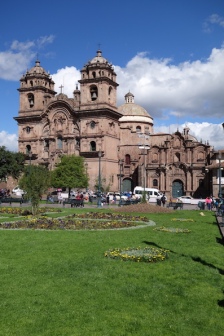 It’s a high-end tourist town, which would generally encourage us to avoid it, but in the off season (now) we were happy wandering through the narrow cobble stone streets. We camped on the Northern edge of town, right next to the amazing Sacsayhuaman Archeological site.

Very different from the other Inca sites (of which there are many!) Sacsayhuaman has the biggest rocks and the most exacting construction techniques you can see. Built as a temple (not as a fort, as many suggest) even if you’re not into rocks and construction, this place amazes. Limestone rocks of all shapes and sizes meet perfectly on all faces – no mortar or filler here! The walls are bigger at the base, sloping backwards slightly and over the years have survived a number of massive earthquakes that flattened buildings in Cusco. 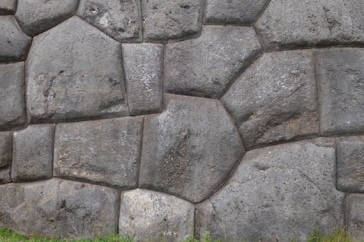 No mortar, no gaps.

No gaps here either!

Unfortunately, the Spanish didn’t appreciate the site and used it as a ‘quarry’, with all but the biggest rocks being used to construct grand Spanish buildings down the hill in Cusco. One can only imagine how amazing this site once was.

4 thoughts on “Cusco and Sacsayhuaman”