Chuquicamata copper mine is the world’s largest open pit copper mine. We took the opportunity to take a 3 hour tour of this mine which began at the very professionally organized Codelco visitor’s office in Calama. We duly demonstrated that we had water bottles, sunscreen, long sleeved shirts, long pants and covered shoes. We signed a waiver and were issued with hard hats and high visibilty vests to wear. The tour began with a coach ride to the mine where we first visited the now abandoned township of Chuquicamata, originally established to house the workers in the early 1930s.

The old main street – waste material is encroaching on the old town.

Preservation of what’s left of the town is now taking place.

The old theatre – must have been an impressive affair.

The township of Chuquicamata boasted a huge theatre, main street of shops, primary school, high school, hospital, cafes and banks plus a sports stadium. Abandoned in 2007 due to its proximity to the mine and the dust this created, the town was destined to be buried under the rock as the mine continued to expand. It was decided at some stage during the past 10 years to instead, preserve the ghost town. It is quite eerie looking up the main street as the street disappears under the rock.

From here the tour takes you through the original processing plant (on the coach) and after some additional security checks, into the pit! 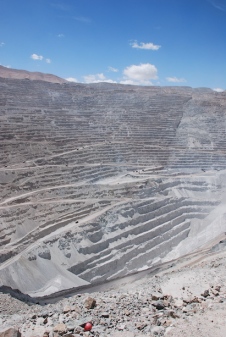 We probably went down about 300 metres and were able to get out at a designated viewpoint to spend some time viewing the mining activity in the pit. This is not for the fainthearted. The hole is 1.1km deep and you can see the trucks at the bottom, looking like tiny ants. Our bus travelled on the same road as these monstrous ore trucks and with their 4 metre diametre tyres and 80 ton loads, they dwarf the coach and create an impressive sight.

2 thoughts on “Chuquicamata Mine”