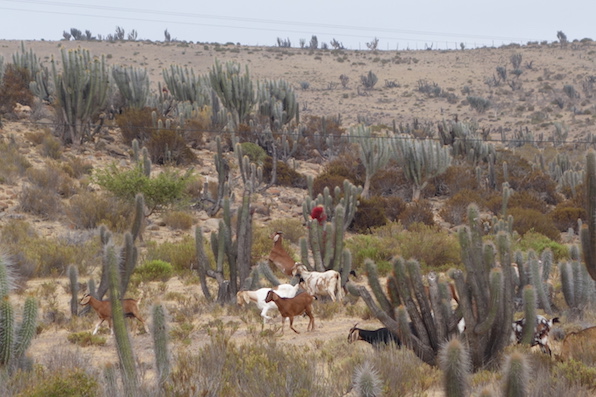 North out of Valparaiso we drove the coast road for as long as we could, avoiding the main freeway North. The beaches and the surf get better and the holiday accommodation goes from high density concrete adjacent to the beaches to smaller neater (and probably more expensive) places amongst the hills. Turning off the coast the only practical way North is on the efficient and smooth Ruta 5. Our wanderings around Argentina and Chile have so far meant we have not had access to and / or avoided the ‘fast’ roads. On anything resembling a freeway, tolls stops are fairly consistent and for those of us from (still) toll free areas of Aus, it’s a new experience. Payments vary a bit at each stop along the way but a 250 km jaunt on the freeway will cost between A$12 and A$15 or so. However, the reward is an excellent and fast road. Drivers are generally good and vehicle speeds vary a great deal as you would expect, with a fair share of busted arse utes, smoking semis, farm machinery and long haul buses sharing the road. Stops along the way also vary. Modern and glitzy Copec road houses with huge carparks and a variety of eating places appear between a conglomeration of ‘shacks’ of all descriptions touting hand written black-boards promoting queso (cheese), then further along, peaches, then watermelons, then tomatoes, then sweet pastries. You could do your weekly shopping cheaply but it would take a long time to get where you were going!

The countryside changed to dry, seemingly unproductive rolling valleys where goats and cactus seemed to be the only living things thriving. This was deceptive as the amount of produce being sold attested to.

Over a few days we made our way to La Serena, on the coast, which was as far North as we were going at this time.

2 thoughts on “North from Valparaiso”