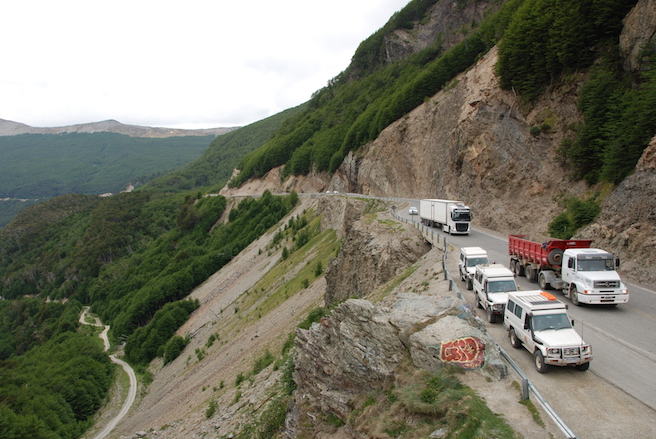 Isla Grande Tierre del Fuego (obviously Big Island!) is shared between Argentina and Chile – the border is a straight line running north to south, giving them ownership of roughly the same amount of land on the island. Travelling from the North, it’s flat, stark, windswept Patagonian steppe, often dotted with sheep and the odd Estancia, but quite quickly the landscape changes to the stunning snowcapped peaks which slowly envelop you as you approach Ushuaia.

Ushuaia, the southern most city in the world. That’s doesn’t mean there are no townships further south on the many small islands, but Ushuaia is the big boss down here in this remote part of the world. It was hard to know what to expect as we rolled into Ushuaia on a day of light winds and mostly sunshine – this type of weather at least we did not expect! The entrance to town is not pretty – light industrial, warehouses and along the foreshore, shipping containers and port paraphernalia. Things change as you approach the city centre – tidy down around the wharf area with a couple of big cruise ships and a multitude of smaller vessels for transporting tourists (those not going to Antarctica on the big ships) out to the Beagle Channel and beyond. We were weren’t prepared for the manic traffic and busyness of a place that has grown very quickly – mainly as a result of adventure tourism and it’s proximity to Antarctica. Of the 50,000+ travellers who cruise to Antarctica each year, 43,000 of them depart on cruise ships from here, making the 3 months of summer very, very busy in the tiny port.

Ushuaia was good to us weather wise though and we spent three days there, taking a boat tour on the Beagle Channel, walking in Tierre del Fuego National Park and we visited an Antarctic virtual experience and also the Maritime Museum of Ushuaia. 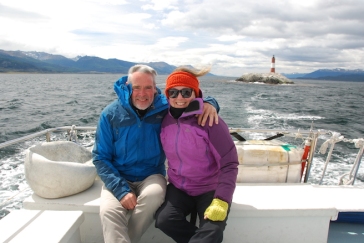 After so long planning to get to Ushuaia, it was difficult to leave – but then again, the weather had changed and it was cold, wet and windy and it was time to head for Alaska!