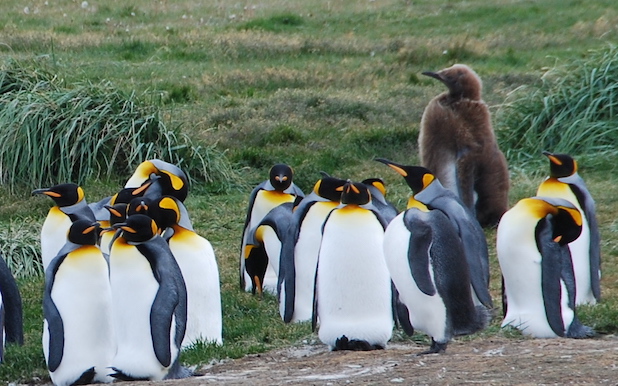 Head North, turn left and cross the border back into Chile at San Sebastian and head out on the dirt to a large inlet on the Magellan Straight to visit a King Penguin colony. What a privilege – the only colony of King Penguins that you can drive to! All the others are on islands further South or on Antarctica. 11 years ago this small colony of 25 nesting pairs appeared on some farmers property – no doubt to his surprise! Archeological evidence in the middens of the Yaghan people from the area shows that 4,000-5,000 years ago, there were King Penguin colonies all the way along the Magellan Straight. It’s fascinating that these penguins have found this place again. This was just fabulous to see. The babies were large and covered in brown down or in the process of moulting and changing to the fantastic colours these birds are known for. 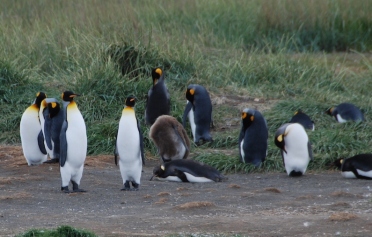 With such a small colony, it took a lot of patience to see any action. By action, we mean any movement! Some were sleeping, some just standing about and others lying down resting. But those of us who waited a while saw a couple of penguins greet each other and toddle off towards the water together. Lucky us!

After the penguins, there was nowhere to camp. The winds were gale force and there is no shelter from it, so in 100km+ per hour winds, with the sun going down (so it was late, as it sets at 10pm!) we drove another 130km on undulating dirt roads along spectacular coastline, to the little village of Porvenir where we were lucky to stay at a beautiful hostel overnight.