We’re using an app called Maps.me to navigate along with printed maps. The app allows you to navigate in the same way as Google maps but there is no need to be connected to a network. Using this fabulous technology allows us to plan then agree on the fine detail in a route before hopping into the cars. Occasionally the location drops out but there is always another option…a printed map and asking a local.

Trinidad 401km away, was the destination as we were heading for the nearby Geoparque Grutas del Palacio. Tuesday morning brought torrential rain for several hours, so we were glad to be in the cars, rather than trying to sight see. This gave the cars a good wash after 2 months in a container on the ocean & a few days of ocean spray. Then, just as ‘requested’, the rain cleared late in the day, just in time for us to arrive at our chosen campsite to blue skies. 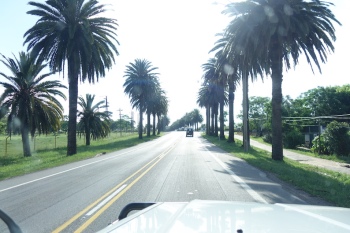 We stayed in a picturesque roadside campsite on the side of a river with hot showers. Perfect.

Inland, the countryside has been well grassed, green rolling hills dotted with very happy cows and sheep and of course the occasional Gaucho. The roads have varied a lot but have been fine and we have not found too much traffic since leaving Montevideo. There are many toll roads and it’s not easy to avoid them. Tuesday we paid 3 tolls – each about $4AUD.

Grutas del Palacio is a geological site. The site consists of columns that have eroded to create grottos about 1-2m high. We were greeted and taken on an excellent personal tour by Ceclia, a ranger who spent over two hours with us both in the small interpretive centre, watching the movie then escorting us through the grotto. This fascinating place, once thought to be man made has been proven to be a geological formation although scientists still have more than one hypothesis regarding the formation. 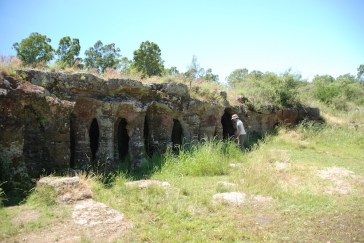 The birds here also caught our attention so we took good advantage of our own ranger. The entrance fee & tour cost $2 AUD per person.